The history of petroleum geology in Georgia can be divided into three parts: from ancient times until 1929, 1929-1994 (“Georgian Oil” times), and from 1994 until present. Those periods vary in both oil production methods and achievements.

Surface oil seeps in Georgia (Figure 1) have been known since ancient times. Multiple historical documents written by travellers of the Middle Ages include records of trading oil produced in Georgia from both the west and east parts of the country. At that time, the only way of producing oil was directly from surface oil seeps or at most digging shallow pits. Drilling of production wells in these oil seep areas first started at the end of this period, which lasted until 1929 when The Trust “Georgian Oil” was established. The oil was used for fuel, lighting, as a lubricant and in medicine. 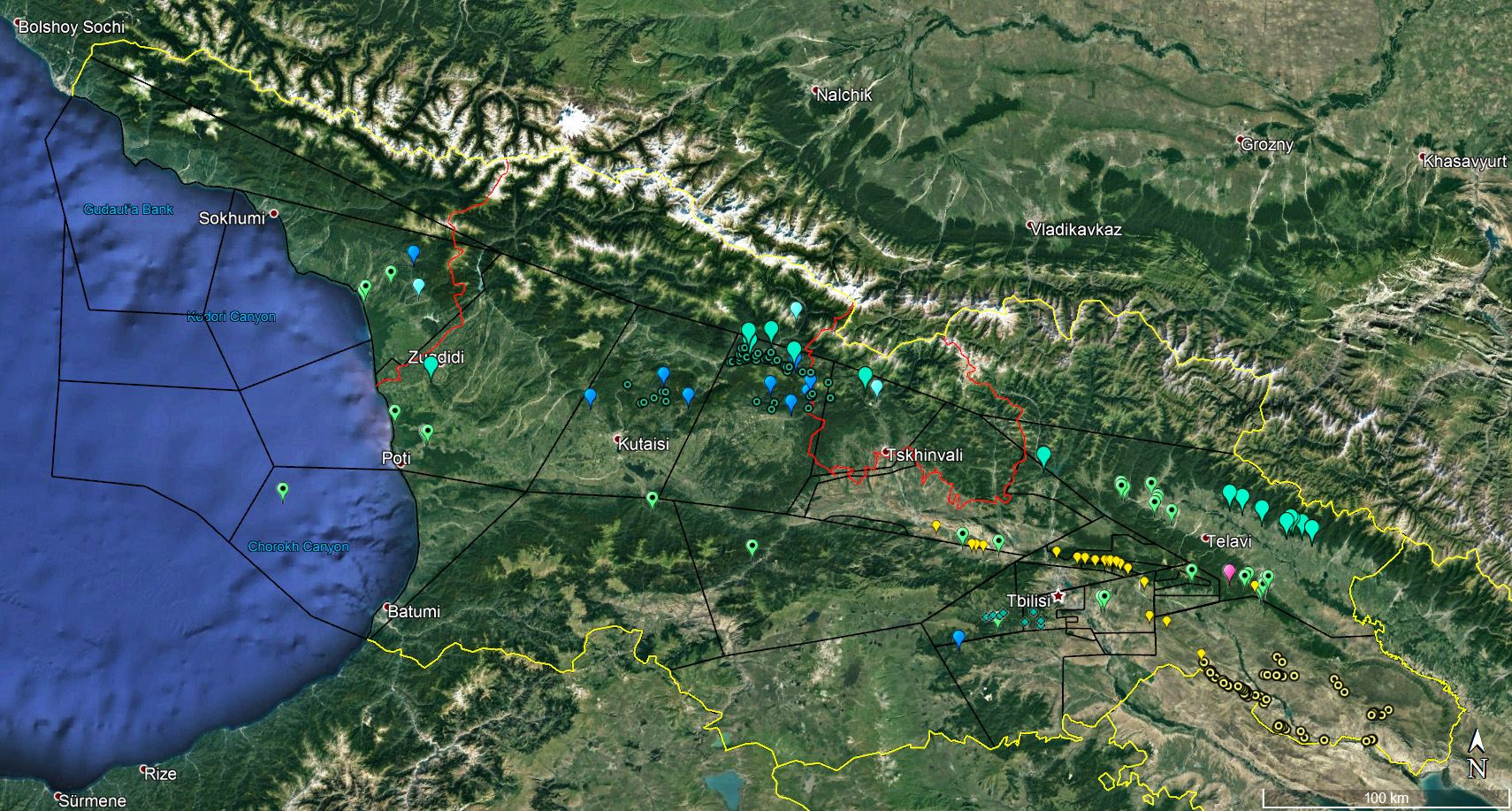 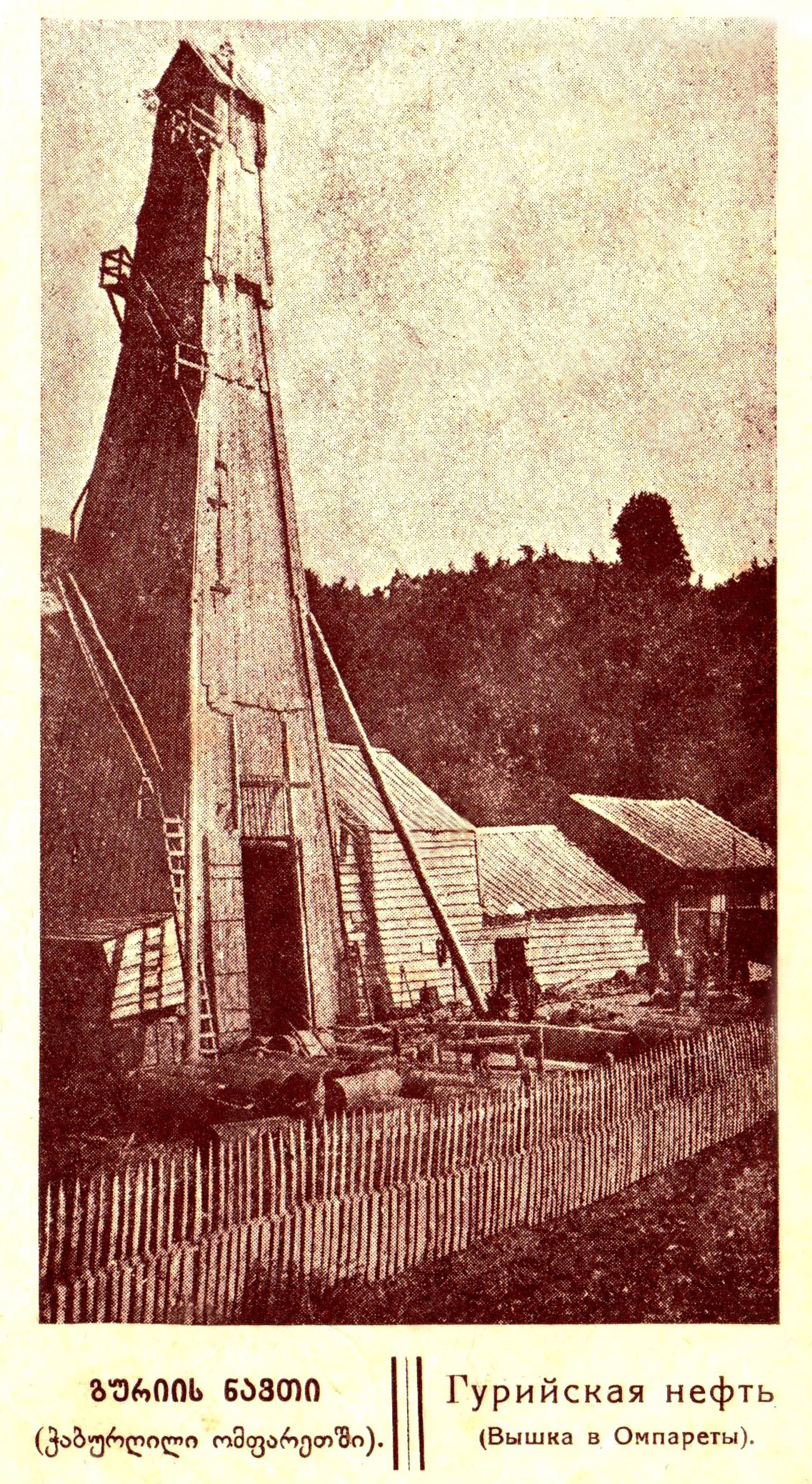 In 1869 Walter Siemens, a Prussian entrepreneur and businessman, obtained licenses for Shiraki, Mirzaani and Eldari (southeast Georgia). The first wells were drilled to between 38 to 15 m depth with initial production of some 10-17 bopd.

Siemens’s experience was applied in all other oil producing regions of Georgia and his activity attracted the interest of Georgian, Russian and Armenian oil interests to Georgia. However, the methods of oil production, reservoir engineering and reservoir management were extremely limited as was the basic level of geological knowledge and geology of the areas – consequently oil production was dropping fast. Oil production with this method dropped to 8,000 bbls/day by 1890.

World War I brought oil production in Georgia almost to zero and all the oil refineries closed which lead to an increase of oil prices in the country and the requirement for the import of oil from Azerbaijan. After the formation of the Soviet Union, oil exploration continued with the same primitive methods (drilling very shallow wells) by private and state-owned companies.

In 1929 the State National Oil Company “Georgian Oil” was formed by the Soviet government and a more comprehensive geological and scientific approach was adopted.

For petroleum exploration purposes, Soviet/Russian experience was applied, as it was soon understood that geologically, Georgia, being located just south of the Greater Caucasus Mountains, might have a very similar setting to the well-known Russian oil fields in the Northern Caucasus. Georgia is squeezed between two major orogenic systems: Greater Caucasus (which divides Georgia from Russia/North Caucasus) and Lesser Caucasus. Between those mountains, the same sedimentary formations are present which form the petroleum systems of the Northern Caucasus. Recognized source rocks were the Maikop (Oligocene-Lower Miocene), and the Upper Eocene. Today, Lower Jurassic shales are being added to the source rock list. Major productive reservoir rocks are the Middle Eocene fractured volcanic tuffs, Cretaceous dolomitized limestones, and Chokrakian (Middle Miocene) and Upper Eocene sandstones.

During this period, due the application of scientific techniques in Georgia, most of the larger discoveries to date were made. One of the first oil fields developed by Georgian Oil was Mirzaani, which is located in the southeast region of Georgia. It was this field where the first deep (540 m) exploration well was drilled which flowed oil. In the next two decades more than 200 production wells were drilled, with the thickness of productive zones as much as 30-40 m. Mostly oil was produced from 500-1200 m depths and daily production varied from 4 to 100 bopd (per well). All producing wells initially flowed oil and after the initial rate dropped, they were produced for decades by pumping. Total production to date from Mirzaani Field is 7.9 MMBbl.

Norio Oil Field (close to Tbilisi) also was found in 1939, and Satskhenisi Field was found in 1956. These fields are characterized with high variation of initial rates, which is explained by low permeability of the reservoirs and fracture-based nature of oil flow. Total produced oil from these fields is approximately 2.1 MMBbl.

World War II stopped all exploration operations in Georgia and oil and gas exploration resumed on a more serious level some years after the end of the war.  In 1967 in the Teleti area (southward close to Tbilisi) at 2712 m well #11 suddenly produced a strong gas flow of 250,000 m3 per day, which was the first commercial production of gas in Georgia. However,Teleti Field production dropped very fast and it became only an oil field. Total production from Teleti Field is 3.8 MMBbl. 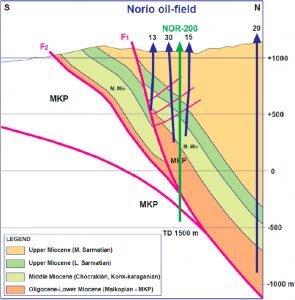 Until 1974, oil had been produced only from Upper Eocene (Teleti), Oligocene (Satskhenisi), and Miocene reservoirs (Norio, Shiraki, Taribani, Mirzaani) covering central and eastern Georgia, but exploration continued for the Cretaceous which was a famous reservoir in the North Caucasus where it had produced over 2 bn bbls at a rate of 400,000 bopd.

In 1974 exploration drilling started for the Cretaceous in the Samgori-Patardzeuli area (southeast near Tbilisi), but accidentally the biggest oil field of Georgia was found in the Middle Eocene fractured volcanogenic reservoirs, which had never been considered a prospective zone in Georgia.

The first commercial well #7 flowed 7,000 bopd. Two hundred wells were drilled after this in Samgori-Patardzeuli, Dimensions of the field are 24 km length and 2.5 km average width. Initial production of many wells was over 3,500 bopd. The average distance between wells was 500-750 m with high quality (0.825 g/cm3) oil. This discovery brought in a highly knowledgeable technical staff from the Northern Caucasus and exploration continued mostly for the Middle Eocene throughout Georgia, however commercial discoveries in the Middle Eocene after Samgori-Patardzeuli occurred only in the South Dome Field and Teleti (south of Samgori-Patardzeuli). From 1974-1984 in Georgia, 172 MMbbls of oil was produced from the Samgori-Patardzeuli Field, with peak production reaching 70,000 bopd.

After the collapse of the Soviet Union, funding for oil exploration and development ceased, followed by the civil wars in Georgia which completely ruined the domestic oil and gas industry.

In the mid 1990’s, the territory of Georgia (including offshore) was divided into small license blocks which were taken by different junior exploration companies. Around 15 companies were license owners in Georgia in 1994. Currently nine companies are license holders under Production Sharing Agreements with the State; 90% of onshore Georgia had been licensed for petroleum operations.

Currently, the Georgian oil and gas industry is mainly in the exploration and redevelopment stage, and by applying modern technologies it is believed that there is real potential to increase cumulative production 10-20 times in the short to mid-term. 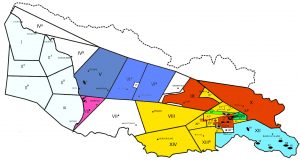 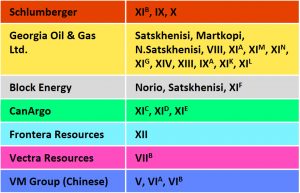 (2) Exploring Jurassic source rock potential, which has never been explored, yet has the excellent widespread source rock Maikop within the country, and